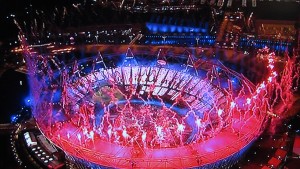 To spend at least nine thousand million  pounds at a time sports provision for schools and for adults was being cut or threatened with cuts across the country and when the arts were to be starved of government, council and lottery funds seemed indefensible. It also seemed to me hard to justify money being lavished on the sporting “elite” so they might win us lots of medals and build for themselves careers advertising designer sporting goods..  I also imagined after Beijing that any opening ceremony, like the show put on for the Millennium, would be bland and second rate and look pitiful compared with the Shock and Awe of China’s impressive opening.

Time will tell if the cuts already imposed will ever be reversed (given the mess our economy is init looks VERY doubtful) and if I was right in my other gloomy forebodings, but certainly I was wrong about the Opening Ceremony. Danny Boyle and the far sighted people who commissioned him have given us all an amazing and uplifting experience, a new myth, an unforgettably powerful narrative to portray where we come from, who we are and what we stand for.
Of course the usual suspects were predictably quick to denounce it as left wing rubbish and in so doing have betrayed themselves as rancid, but the overwhelming response has been to see it, be moved by it, to feel proud and say,  “Yes! This is how we wish to see ourselves and this is how we wish others to see us.” We are a country which has gone through dark days of enormous social change and catastrophic wars, but has come through it to build a society in which the sick are cared for regardless of personal resources, the disabled are valued and asked to sing, in which cultural diversity is embraced and celebrated and women are properly recognised, We are a country where the Head of State is not only uniquely popular as a guardian of democracy and the rule of law, but is prepared to take part in the enactment of the most amazing joke, a country in which the armed services appear unarmed and are applauded as protectors, not feared as agents of oppression, and where the victims of an appalling act of terrorism are clearly remembered in the midst of a global celebration. We are a free and open society,  humorous, self-deprecating, compassionate, ironic, extraordinarily creative and optimistic, generous and friendly, an embodiment of liberal values.  That was the vision he gave us.

Are we all these things? Of course not, though we are a great deal better at them than our habitual self-critical attitudes often lead us to believe. That though is not the point.  The point as I see it is that what that incredibly cleverly staged, lit, performed and conceived extravagance did was to tell the millions who watched in this country and near billion who watched around the world that this is what Britain is and aspires to be – and of course that we are the coolest place on the planet with so much to offer the world.  Do I go too far?

I have now also watched the Paralympics. Yes inspiring, yes amazing and moving and yes it shifted my perception about what physically disabled people, particularly when they are young, can achieve and how very important it is for all disabled people to have access to pools, gyms and sporting facilities – not to mention adequate support for living and where possible working.

I speak from experience as a heart patient and a back patient who has experienced quite serious but thankfully temporary disability and who along with quite a large group who are near or older than my 71 years are to be seen in my local pool and gym where I work out and swim three times a week.

There of course was the rub and the one overt political act of these amazingly enthusiastic and happy games, that was the booing of George Osborne when he appeared to give out paralympic medals. Why? Because of his responsibility as Chancellor for the French company that is re-assessing if people on disability benefit are capable of work.
Far too many accounts are coming out that in fact in their rush to earn their commission this company is imposing quite horrible cuts in assistance on many disabled people who have no chance of working.  Let’s hope Parliament puts a stop to that. Not easy for support for disabled people is very expensive and with an aging population and medical improvements there are many more of us who are suffering from severe disabilities.  Let us hope however that the lasting result of these great but very costly games will be a change in attitude and political will towards the disabled and among the disabled a heightened awareness of what can be done to face disability creatively.