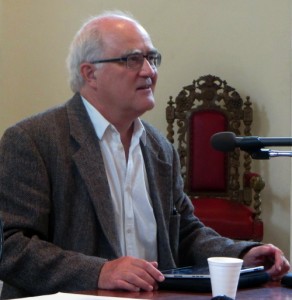 nagging tug of insecurity, a faint aura of betrayal in declaring myself in these terms.

urgently as possible to the suffering of life in this world, in this century (our

later. Rather than attaining nirvana, I see the aim of Buddhist practice to be the

1.Without having labelled myself one I see from meeting and reading Stephen that I am and have always been a “secular buddhist” since turning to the Buddha Way in 85. As a post-Chistian atheist who rejected all forms of supernaturalism I have never been prepared to accept anything in the tradition that has seemed to me superstitious or irrational.  Married with a family I have also been a supporter of the Theravada monastic community and have learnt much through their teaching and example. (Ajahn Sumedho and Amaravati)

1.My aim has been to find what makes for a happy, fulfilled good life right here and now rather than some distant “enlightenment” in some mythical future individual identity. This involves reflecting on and dealing with the pressures and inclinations, internal and external, which can make life tough or happy. In attempting to do this I have found Gotama’s teaching and the pattern of how to practice (meditation and the 5 precepts) that he has passed on Buddhists enlightening and compelling.

broadly humanist environment, did not attend Church, and was exempted from

“scripture” classes, as they were then called, at grammar school in Watford.

was considered a highly unconventional career path. Buddhism, when it was

mentioned at all in those days, was dismissed by mainstream Western media as a marginal though benign spiritual preoccupation of ex-(or not so ex-) hippies and the

occasional avant-garde psychiatrist. I would have dismissed as a fantasist anyone

NHS, and a U.S. congressman (Tim Ryan, Dem.) would publish a book called

A Mindful Nation How a Simple Practice Can Help Us Reduce Stress, Improve

Performance, and Recapture the American Spirit

helping us come to terms with many of the personal and social dilemmas of our world.

the conditions of this saeculum meaning our contemporary time?

incomplete) understanding of the historical, social, political, religious and

BCE India. Thanks to scholars like Richard Gombrich , (See his: What the Buddha Thought) we are beginning to see more clearly the kind of world in which the Buddha taught. Together, these two fields provide a fertile soil for the project of rethinking, perhaps reimagining the dharma

from the ground up.

as opposed to a well intended “clarification” added by a later commentator? We are

1. The principle of conditionality. – By this do you mean his teaching that all actions, including thoughts, have consequences – we cannot escape cause and effect.

3. The practice of mindful awareness as the key to deepening our understanding of ourselves and to strengthen our ability to act responsibly and morally.

4. Anatta.  His teaching on the insubstantial nature of the self and his rejection of the atman idea of the Brahmins.

5. His rejection of the caste system.

6.  His overseeing, setting up and training of the monastic Sangha as the bearer of his teaching and practice so it remains the oldest continuing religious institution in the world.

those beliefs that it shared with its sister Indian religions Hinduism and Jainism. Yet

when you bracket off those beliefs, you are left not with a fragmentary and emasculated teaching, but with an entirely adequate ethical, philosophical and practical framework for living your life in this world. Thus what is truly original in the Buddha’s teaching, I discovered, was his

secular outlook.  (That needs to be expanded. He rejected superstition and all worship of supernatural beings, he rejected the caste system, the second-class status of women, the authority of priests, teachers, animal sacrifices, astrology, he even warned against his followers treating his words with uncritical acceptance and asserted that as wisdom grows then we must decide for ourselves.  And when you bracket off the quasi-divine attributes that the figure of the Buddha is believed to possess – a fleshy head -protuberance, golden skin etc. Omniscience and moral perfection–and focus on the episodes in the canon that recount his often fraught dealings with his contemporaries, then the humanity of Siddhattha Gotama begins to emerge with more clarity too. All this supports what the British scholar Trevor Ling surmised nearly fifty years ago: that what we now know as “Buddhism” started life as an embryonic civilisation or culture based on compassion, respect for people, families and their property, for animals and nature, that minimised violence, promoted tolerance and placed heavy responsibilities to promote these values on rulers that then mutated into another organized Indian religion in the face of “business as usual.”with corruption, oppression and war.

world and time, thus finds vindication through its critical return to canonical sources,

and its attempts to recover a vision of Gotamas’s own saeculum space in history Above all, secular Buddhism is something to do, not something to believe in.

This pragmatism is evident in many of the classic parables: the poisoned arrow [M.

propositions to be affirmed. Instead of trying to justify the belief that “life is

suffering” (the first noble truth), one seeks to embrace and deal wisely with suffering

when it occurs. (sorry I don’t get this. We are surrounded by pain and alienation in ourselves and in others and the root causes of it are the patterns of compulsive, addictive, unaware and unreflective behaviour that ignores consequences and  constitute greed hatred and delusion Instead of trying to convince oneself  (I don’t try and convince myself of this. To me it just seems blindingly obvious as being the case.)that “craving is the origin of suffering” (the second noble truth), one seeks to let go of and not get tangled up in craving whenever it rises up in one’s body or mind. (Yes.  Here I agree) From this perspective it is irrelevant whether the statements “life is suffering” or “craving is the origin of suffering” are either true or false. Why? Because these four so – called “truths” are not propositions that one accepts as a believer or rejects as a non-believer. They are challenging pointers to the nature of reality, of how life is which can be seen as we reflect on our own experience and that of those around us. They are also suggestions to do something that might make a difference in the world in which you coexist with others now.

with the established views of one’s brand of Buddhism), but rather the opening up of

a way of being -in-this world that is no longer determined by one’s greed, hatred, fear  selfishness and delusions about oneself, other people and what constitutes good and worthwhile behaviour . Thus awakening is not a state, but a process: an ethical way of life and commitment that enables human flourishing. As such it is no longer the exclusive preserve of enlightened teachers or accomplished yogis but to a greater or lesser extent something which all of us can participate in. Likewise, nirvana –

i.e. the stopping of craving – is not the goal of the path but its very source. Sounds good but not sure what it means. Are you saying that we flourish as and when we become aware that we have become neurotically self-centred and unaware that we share life with those around us? For human flourishing first stirs in that clear, bright, empty space where neurotic self-centredness realizes that it has no ground to stand on at all. One is then freed to pour forth like sunlight.