For eight weeks, ending on the 29th of June 2012, I and 24 others attended the basic Mindfulness course at the Oxford University Mindfulness Centre.

Held in this rathery splendid building on the Warnford Hospital Campus in Oxford, the course has been meticulously well lead by Marie Johannson and Jill Johnson and has been a powerful experience.

Having signed up months before it came as a great surprise when two weeks before the course started I pulled a muscle in my back with a trivial movement and within days was unable to walk and in constant and pretty relentless pain.  I attended the first two sessions arriving in a wheel chair driven to Oxford by Elizabeth. B the end of the course as a result of help from a remedial gymnast I was recovering and a year and a half later I have totally regained mobility and have no pain. No experience however could have better prepared me for Mindfulness training than having at the same time having to deal with my back.  What did I learn?

Basically, Mindfulness as promoted by Jon Cabot Zin in the US and Prof Mark Williams here at Oxford is the application of basic Buddhist Insight Meditation for the enhancement of ordinary living, business applications and management, in schools and in the case of both Zin and Williams, the treatment of patients suffering from chronic stress, depression and anxiety and others having to deal with relentless chronic pain.

What did I learn?  No is does not take away the immediate experience of pain, but it helps you focus on the actual as opposed to the remembered or anticipated pain and it engenders a calmer and more focused approach to it.

What then is the essence of mindfulness? It is the development of both a skill and and a perspective, the skill first to focus on the breath and the body as a way of disengaging from relentless chain of thoughts and emotions that course through us, and become a detached yet amicable observer of them, increasingly skilled in letting them go and returning to a basic and fundamental awareness of body, breath and mental and emotional life.

This has been done since the days of the Buddha, but where the mindfulness approach differs is that it links meditation practice to neuro-science and psychological research.  Here the evidence is that disciplined daily formal meditation practice has a measurable effect on the brain and a wide-ranging series of effects on thinking, emotions and behaviour.

Since being on the course I have heard Mark Williams and John Peacock speak to the London Insight Society (Buddhist meditation promoters) and have been on a follow-up one day course in Oxford on teaching Mindfulness in non-clinical sessions (Clinically it is now being successfully introduced into the NHS) and in December I am attending a week-end taught by John Peacock who is now associate director of the Oxford Mindfulness Centre at Gaia House, the Insight Meditation and retreat centre in Devon.  Watch this space. 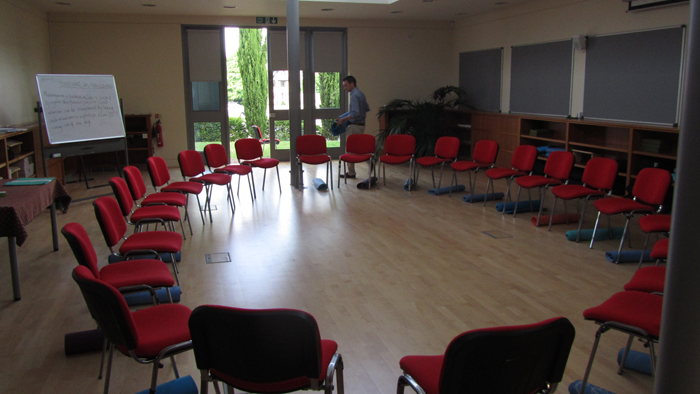