Nothing unites people like a dangerous external enemy and papal preaching and encouragement of the Crusades whipped up a level of fanatical self-sacrifice and hatred of Islam which it is hard to imagine but which affected all classes across Europe. However in the end except for Spain and Southern Italy the Crusades were a failure.  The Muslim “Infidel” remained in control of North Africa and the Middle East and eventiually in 1453 took Constantinople.

Partly as a result of this classical Greek texts and Greek and Hebrew texts of the Bible became available for study in the new universities of Europe. The rational thought of the Greek philosophers and the realistic art and focus on the body beautiful ushered in the Rennaisance and new styles of thinking painting and even decorating churches. The growth of scientific thinking (Galileo etc) questioned the earth centred cosmology of the Catholic World View and the coming of printing revolutionised culture encouraging literacy to new levels and providing accurate and impressive translations of the Bible from Greek and Hebrew texts into vernacular languages like English and German.  These provided direct access to the words and meaning of scripture as never before and criticism grew of the teachings and practices of the Catholic Church from some of the finest scholars. As a result much of the medieval Catholic World View was condemned as superstition and not in line with Scripture.  At the same time the globe was circumnavigated, America was on the map and everything seemed to be changing.

The Protestant Reformation erupted with Luther, Calvin and Zwingli, each promoting slightly different views, but all rejecting the Medieval Catholic World View in favour of a darker, simpler, less hierarchical Protestant World View..

All the encouraging crowds of the Communion of Saints headed by the sympathetic figure of Mary providing grace through the sacraments and intercessory prayer are gone. The dead are now seen as being in a state of suspended animation awaiting the Last Judgement.  No point praying to them. The Mass is seen as having become a superstition. Instead the Lord’s Supper should be seen as a simple memorial. 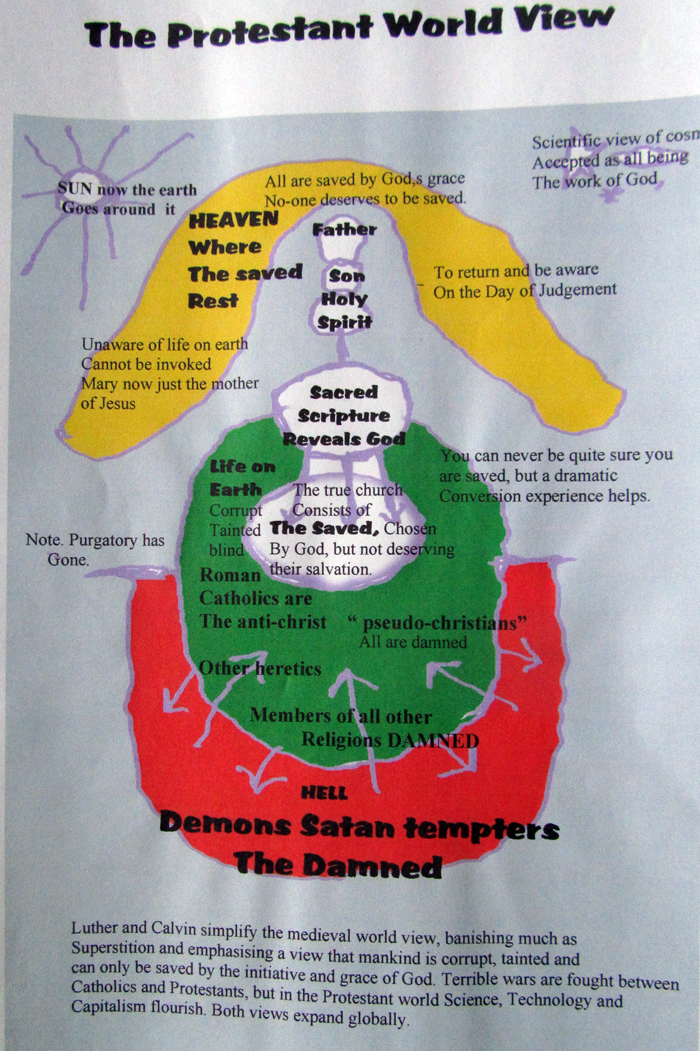 Not surprisngly an appalling blood bath erupted across Europe in the Thirty Years War (1618-16-48) as supporters of these two very different world views treated each other as no better than the Infidels. In England there was some compromise with something of a Middle Way promoted by Elizabeth 1, but again the divisions bit deep and the country erupted into a terrible civil war. Eventually both sides, Catholic and Protestant adopted limited levels of tolerance and stopped killing each other, but the price had been high.

In the Protestant lands, Britain, Holland and some German states scientific thinking, manufacture on a big scale, secular philosophy and theorising about democracy, the rule of law and the rights of Man arrived. The Age of the Enlightenment was dawning. This was boosted by the American and French revolutions and the revolutions across Europe in 1848 saw the growth of free thinking, liberal views, and calls for religious toleration.

The Protestant World View however, like the Catholic World View has remained resiliant, particularly in the United States in denominations such as the Southern Baptists and a wide range of churches that regard themselves as Evangelical, Fundamentalist or Charismatic.  They strive to take the Bible as literally as possible and emphasise the power of the supernatural, seen positively in God continuing to carry out miracles of healing, guidance, protection and exorcism and negatively in the power of Satan to posses people and lead them into sin. It is also common for them to reject evolution by natural selection and some even believe in a miraculous special creation of all species.  They continue to reject the authority of the Catholic Church, but often are closer to it in teaching and attitude than to Liberal Christians on issues such as abortion and homosexuality, in fact they doubt if Liberal Christians are really Christians at all.

These churches have also been very effective in carrying out missionary work across the world, particularly in South America, Africa both central and Southern, China and Korea.