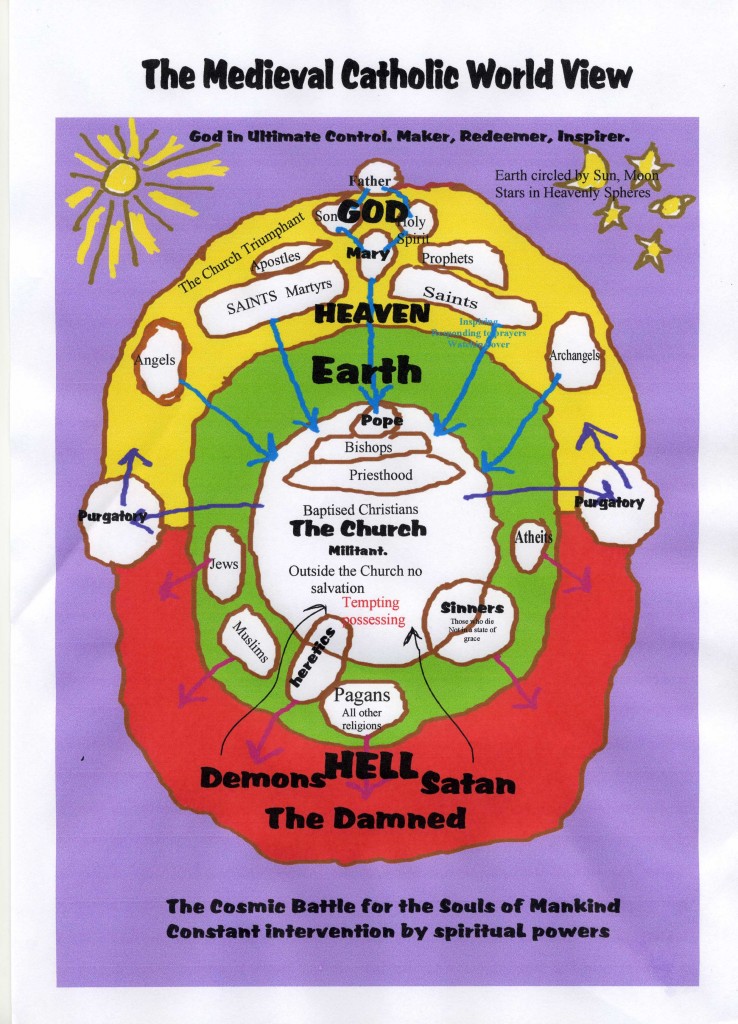 This diagram resembles what can be seen with slight variations in medieval sculptures above the doors of cathedrals and it has an enormous and satisfying power, so much so that it remains part of the “mental furniture” of many Catholics even today, and it seems is looked on with approval by the present Pope Benedict.

In origin it is a development of world view of the Early Church when it was made the official religion of the Roman Empire by the Emperor Constantine in the 4th century as he sought to do battle with  the barbarians and heretics that threatened the Empire. This predominantly Greek speaking Church did not however accept the primacy of the Bishop of Rome, seeing instead the patriarchates of Jerusalem, Constantinople, Rome, Antioch and Alexandria as being on the same level as regards ecclesiatical authority with the Emperor having supreme secular authority,and a great deal of authority over the Church as well..

When the Empire split and fell to the Barbarians in the West the Bishop of Rome survived to become the unquestioned leader of the Latin speaking Roman Catholic Church. This prospered under Charlemagne in the eighth century. A new European Empire was established headed by the Holy Roman Emperor as secular and the Pope as religious authority.  Relations with the Orthodox in Constantinople deteriorated, reaching their lowest point when Crusaders raped and pillaged the city in 1204 instead of attacking the Muslims. The Crusades were a disasterous attempt by the papacy to get the warring feudal lords of Europe to focus on a common external enemy instead of fighting each other by waging war on the Muslims who had conquered Jerusalem (The Holy Land) and most of the Middle East, including Southern Spain and Italy.

This then is the context in which the Medieval Catholic World View took root, becoming the great unifying force of what was refered to as Christendom.

Its starting point is an Earth centred view of the Universe. The Sun, Moon and Stars circle the earth set in a series of transparent spheres. The Earth is seen as a battle-ground between the forces of God and his Church headed by the Pope on earth and the demonic forces of evil headed by Satan tempting good Catholics into heresy, witchcraft, sin and apostacy as most powerfully represented in the Muslim armies branded as Infidels. (those without faith!)

Outside this Catholic Church there is no salvation and to avoid damnation Catholics need to obey the moral teaching of the Church and if they do not seek forgivenes through the sacrament of Penance and by making generous gifts to the Church. The hierarchy of the Church dispenses Grace though the Sacraments of which the most potent is the Mass, a miracle for the faithful through which they receive the body of Christ in the form of a wafer of bread.  Many receive this daily to ward off evil and to strengthen them for the fight.

They also pray to and are heard and watched over by the whole Church Triumphant in heaven, Prophets , Apostles, Saints and  Martyrs presided over by Jesus and particularly listened to by Jesus’ gracious mother Mary. “Pray for us sinners, now and at the hour of our death.”

It is a vivid and engaging world view, easily understood by the illiterate as well as the literate and coveyed not only by preaching, but through ceremonies, fasting,vigils and feast days and portrayed in gaudy magnificence in the brightly painted walls, columns and windows of the spectacular churches and cathedrals which dominate the landscape.

This world-view proved itself remarkably resiliant, but in 1517 it came under attack as never before with the unleashing of the forces for reform when the scholar monk Martin Luther published 95 critical theses. This triggered the Protestant Reformation and a significanty different world view arose.