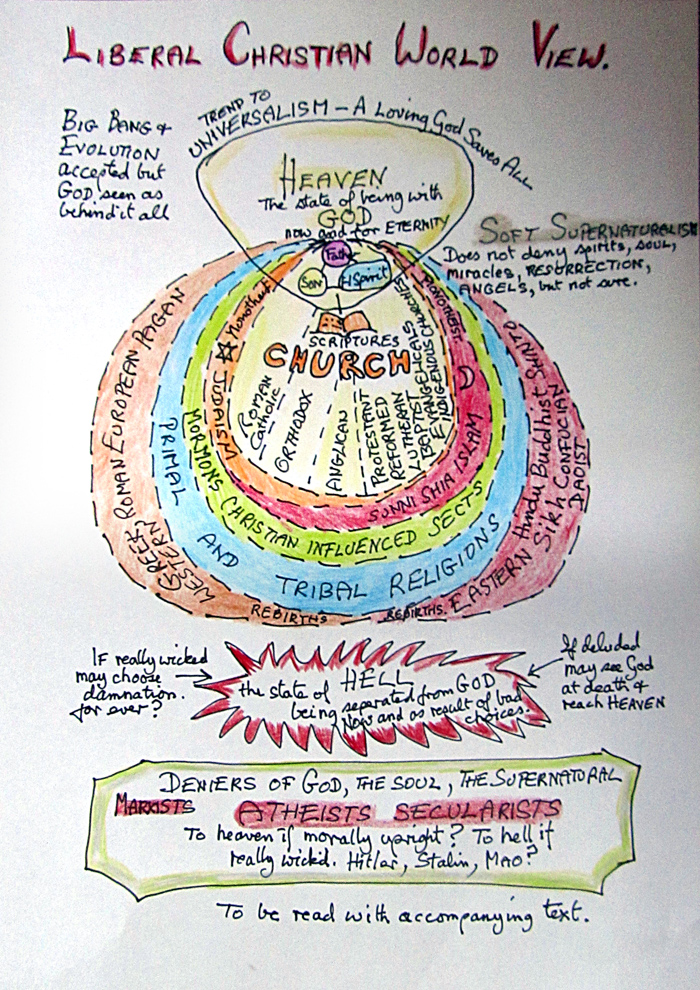 I fear there will be those I know who will not like to be labelled “Liberal Christians” even though I think my description fits. They may feel such a description makes them sound vague, “wishy washy”, intellectually lazy. I think being liberal is none of those things, but refers to honest, intellectual openess and a search for rationality, often not easy.

The liberal view does not emphasise uniformity at the expense of intellectual conscience or personal moral conviction either in teaching or practice. It is an outlook that comes in a variety of modified forms influenced by denomiational traditions and theological study, still this outlook is broadly shared by many non-evangelical and some evangelical Christians, Protestants, pro-Vatican 2 Roman Catholics, most Anglicans/Episcopalians, Methodists, Quakers, and some Orthodox.   What unites them is they have all been influenced by and take seriously the historical-critical study of the Jewish and Christian scriptures, academic church history, Classical and Western Philosophy and the Scientific Method as promoted by Western universities. Increasingly they have also been affected by some study and familiarity with non-Christian religions.

This approach is however inclined to reject total relativism and assumes all knowledge and truth is consistent and interconnected. It assumes there can be no real contradiction between the truths of Science and Religion, except some think religions, like art and drama, may express  truths about the ambiguities of the human condition through their stories, metaphors, ceremonies, symbols, poetry and music in ways which make religion and science virtually unrelated paths for communicating truth.

Nevertheless modern cosmology, e.g. the Big Bang theory and Evolution by Natural Selection are accepted, but GOD is seen as “in through and behind” the whole process of Creation – life and the emergence of HUMANITY. In fact liberals argue that it is more rational to regard the cosmos and all that is in it as somehow the expression of an ultimate mind, than the product of a blind process of random chance.

Humaniity is seen as the crowning creation of the known universe and made “in the Image of God” that is being rational, moral, self-aware, creative, and responsible. Also ready to worship.  Humanity while seen as the pinnacle of creation, is also seen as flawed. We are prone to being  wilfully ignorant, self-centred, lustful, consumed by hatred and capable of  incredible cruelty, insensitivity, prejudice and dishonesty. These propensities make us sinful and in desperate need of salvation/healing.

GOD has set out to put this right, starting with the self-revelation that while God is one in being there are three aspects or personae to the divine, Father, Son and Holy Spirit. Further God has laid down two paths of revelation.

1 Through General Revelation  To all humanity is revealed  the wonder and beauty of nature, a sense of right and wrong, and a capacity to reason – to develop philosophies  and the sciences (Plato Aristotle etc) This capacity is however often flawed.

2. Through Special Reveltion through Abraham,  Moses, the Torah and the prophets of the Hebrew Scriptures.  These words are seen as being if not infallible then a reliable pointer to God’s will and working. Finally God sends:

Rabbi Yeshua of Nazereth. He is regarded as JESUS CHRIST, SON OF GOD AND SAVIOUR OF THE WORLD.  HE IS GOD IN HUMAN FORM COME TO SAVE ALL HUMANITY.  This has been done  through his death on the cross and resurrection to new life. (a complex mystery be it literal or symbolic)

He founds the CHURCH, the community of those who are being saved from damnation in this world and the next – Hell or Heaven. God has also inspired the Christian sacred writings which while not infallible are an essential guide for following and living in the spirit of Jesus.

The Church is divided by human sin. The Ecumenical Movement seeks to recognise and restore unity.

Among Liberal Chistians there is ambivalence and uncertainty about miracle, mystery and the supernatural and the historicity of elements in the Christian scriptures and the reality and meaning of the soul, heaven, and hell.  Are they factual or metaphorical?

As regards what happens after death there has been a move towards Universalism, the belief that no-one will be consigned to Hell or a state of total seperation from God. This can be seen in funeral services where Hell is never mentioned and it is taught or implied that on death each person is re-united with God, family and friends. This is  linked to belief in the resurrection of Jesus.

The cotemporary emphasis on a Social Gospel sees Christians working with God for the poor, for justice, the exploited and those persecuted on racial, gender or orientation grounds.

ATTITUDES TO OTHER RELIGIONS.

Increasingly there is talk of a Judaeo-Christian Tradition as a shared moral/ political vision. Lesser use is made of the idea that there is an Abrahamic Tradition, that is seeing Christian, Jews and Muslims as sharing a monotheistic, moral path.

Those churches which have adopted or have some sympathy with Chistian monasticism see links with Buddhist and Hindu meditation practices and recognise its value.

On the whole  tolerance of other religions  by Christians is a recent Post 19th Century and post Vatican 2 (1960’s) posture. Prior to that crusades, religious wars and the persecution of “heretics” together with Jews and Muslims was normal and seen as proof of faith. Liberals have rejected that, still in general other religions (particularly Afrcan, Native American and other Primal traditions) are seen as more or less hopelessly flawed and their adherants ripe for conversion by missionaries.

Culminating in the Holocaust Jews have been particularly badly treated for rejecting Christian claims about Jesus’ divinity and have been blamed for his execution, Currently post “9 -11” Muslims are viewed with general suspicion. Liberal Christians have rejected both these tendencies and are increasingly critical of Israel and the treatment of Palestinians. While Christian tradionalists have often been supporters or turned a blind eye to  racism, Liberal Christians have rejected racialism strongly.

Liberals  however now favour Interfaith Dialogue which aims at mutual understanding, rather than conversion.

Now it is also more usual for liberal Christians to make common cause with unbelievers and those of other faiths to improve moral, political and social conditions and to fight for justice, human rights and the alleviation of poverty and the suffering caused by disasters rather than actively seek converts. Liberal Christians also recognise human responsibility for the the preservation of nature and the environment.

CONTROVERSIES. Apart from those which divide liberal Christians from those who call themselves Traditionalists, Orthodox, Bible Believing, Evangelicals or Fundamentalist, there are issues that still divide liberal Christians from each other.  Abortion, assisted dying, gay/lesbian relationships, partnerships and marriages and re-marriages, women priests and bishops, attitudes to capitalism and socialism, the divinity of Christ. the meaning of Resurrection, the Trinity, the existence and meaning of God. Heaven, Hell and life after death, ideas concering the soul. These all remain more or less controversial in Liberal Christian circles.