With an excellent turnout of 17 people despite it being the worst day of the wind and floods, it was interesting to see how the group would work with larger numbers.  We felt it was justified to go over five for Steve had travelled from Reading and had put much work into his talk which he delivered as a full Power Point presentation. 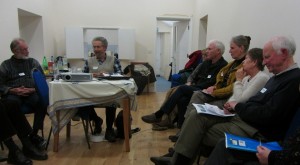 Despite speaking clearly and straightforwardly and without recourse to the specialist vocabulary of the economist – which would have left us all floundering – what he had to say illustrated Oscar Wilde’s dictum, “The truth is seldom pure and never simple.”

That being so attempts to summarise are dangerous, but here goes.

First Steve pointed out that what has become the normative economic theory for explaining how the economy works makes assumptions which are dangerously misleading. It assumes that objects are valuable only if they can be bought or sold, yet many of the qualities, behaviours and experiences – such as satisfying relationships, meaningful work and appreciating the beauty and wonder of the world – i.e. the things which make life worth living and add to human well-being – cannot be bought and sold.

Second he pointed out that economic theory cannot deal with finite and irreplaceable resources and imagines that the supply and demand of goods and services is based on rational as opposed to emotional and other decisions. This means it does not deal with pollution and the exhaustion of natural resources – like using up of the fish in the sea, rare minerals and earths and accessibility to water.  Instead it assumes everlasting growth as measured in the Gross Domestic Product (GDP) of each country is the best indicator of “progress.”  This sets every economy on the path to becoming unsustainable for everlasting growth in a finite world must lead he argued to collapse.

He then explored money, debt and deficit and points out that our national debt, that is the total amount of money the government has borrowed – is one of the largest of any country except the US and that it is as large as our GDP – which makes us effectively bankrupt.  The deficit is the amount government expenditure exceeds what it raises in taxation and again has to fund by borrowing from banks and other countries.  This again continues to grow at a terrifying “exponential” rate, despite “austerity.”

Finally he explored the behaviour of the banks – particularly since the crisis of 2008 describing how their global behaviour has become increasingly speculative and predatory so undermining sustainable businesses and accumulating vast debts. (UK banks carry debts amounting to 600% of GDP) These debts have reached a level (as happened in Iceland in 2008) which makes their sudden collapse a high risk possibility.  All it takes is for their debtors to lose confidence in them and demand higher interest rates on their loans to the banks – and those with deposits in them could be facing huge losses or wipe-out.

Finally going beyond his original paper he gave us some “work in progress” ideas for an alternative sustainable economic theory.  He suggested that instead of seeing “growth” as the goal, economists should see the provision of general “well being” as the aim of the economy.  There was not however time for him to really expound ideas as to how this might work.

His talk had in fact taken an hour, leaving his audience of non-economists feeling we had been hit by a bus. We broke for refreshments and then nine of us came back with our reactions, both to his paper and what he had said.  Impossible to summarise these took very different directions, moral, personal and in the form of more questions for Steve. There was also some general discussion before Steve finished off by reacting to the points made.

The evening ended with more chat and cheese in what everyone agreed had been a really thought-provoking session.

Subsequently I contacted Steve to thank him and he has sent this list of follow-up sources which certainly point the way ahead for exploring a new theory or theories for sustainable economics.

Finally I (John Baxter) came across this article on the web written by the editors of Money Week.  Here in PDF form is my compressed version  Money Week. End of Britain very short Go to the web for the full version. It gives an alterative but not incompatible version of why the present state is unsustainable.