Julie Arliss’ Academy Conferences for school students doing A Level in the Philosophy of Religion and Ethics are well known, as are her well attended conferences for gifted and talented students. This conference was quite different, it was a day for teachers and unlike almost all “training days for teachers” it was not devoted to pedagogy, but primarily about stretching the minds of teachers to “boldly go” where they had not been before by engaging them with cutting edge thinking. 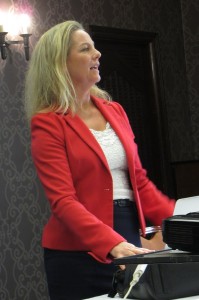 Friday 6th December – yes the day Mandela died – we met in a large and comfortable conference room at the Imperial Hotel in London’s Russell Square. There was a good turnout (34) of Philosophy and Religious Studies teachers from across the country from a range of different types of school and colleges, several having come a long way. Sadly, getting financial support and time off for activities like this has become increasingly difficult for teachers in maintained schools.

Julie Arliss kicked off with the first lecture, Can Natural Theology Prove the Existence of God. Delivered in her beguilingly unpretentious and straightforward manner she explored the work of several thinkers who have proposed scientifically literate though philosophically controversial proposals for “intelligent design”. That is thinkers who contradict Dawson and Dennett not in denying the evolution of the universe and of life, but who argue that in its particularity and consistency it expresses not a process of random chance, but the probability that the cosmos is the product of an ultimate mind.  In particular she explored the thinking of the Cambridge theoretical physicist John Polkinghorne and his book “Science and Creation.”

In the break that followed I approached Professor Ward remarking what a brilliant and clear presentation she had made of such a wide ranging subject and series of thinkers, to which he replied, “Yes, and it is brilliant to get them all right.” 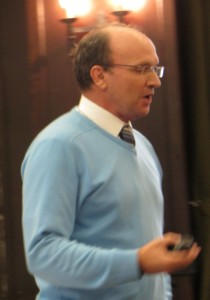 Stunned we had coffee after which Peter Baron, author of text books and study guides spoke. He is a very experienced teacher of Philosophy, Religion and Ethics at A level and author of the web site Philosophical Investigations   He turned his attention to the weakness some exam boards have reported in the way students have handled questions on Science and Religion.  A visit to his site shows how much practical back-up he provides for both students and teachers.

Keith Ward spoke next. Professor Emeritus in Theology at Oxford and formerly a lecturer in Philosophy at Cambridge, he wears his distinction lightly, being friendly and approachable, but when he gets going in a lecture the effect is dazzling. His subject was “Faith Reason and Evidence in “The Grand Design” by Stephen Hawking. Speaking with humour, enthusiasm and without a note we were taken on a magical mystery tour starting with a critique of Hawking’s failure to address questions about the existence of mind and value and going on to examine the quantum vacuum, absolute explanations, theology, the mind of God and how minds create reality. If that has left you behind I must admit it did me, but the full notes we received from all our speakers help one make sense of it all. 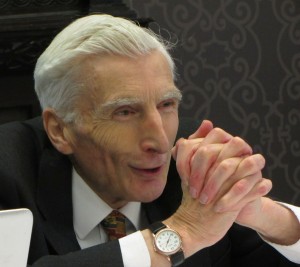 The last speaker of the day was another big gun. Martin Rees is Emeritus Professor of Cosmology and Astrophysics at the University of Cambridge and Astronomer Royal. Starting simply with a look at the earth, the moon and the planets in the solar system in answer to the question “is there life out there? (answer – possibly) he took us further. With awesome illustrations of the mindboggling size and age of the cosmos and a description of the “big bang” which he was responsible for showing other cosmologists is much more likely than the “steady state” theory which preceded it, he effectively revealed what a truly awe-inspiring and mysterious cosmos it is that we live in. He also emphasised how strange it is that we can know quite a lot about the formation and age of stars and galaxies while remaining ignorant about “such things as how to bring up our children and what we should eat” where we depend on very incomplete evidence for our often strongly held opinions.

While emphasising what physics and mathematics can give us as knowledge he also repeatedly made this point which you can find in his Reith Lectures of 2011.

“We (humans) are special. Our self-awareness and language were a qualitative leap ….that lead to science and technology. But some aspects of reality – a unified theory of physics, or a full understanding of consciousness – might elude us simply because they are beyond human brains, just as surely as Einstein’s ideas would baffle a chimpanzee.”  P110 From Here to Infinity.

The day ended with a half-hour dialogue between Martin Rees and Keith Ward where Ward attempted to get Rees to say whether he thought the cosmos did or did not show evidence of design, did or did not think there was evidence as opposed to simply theory regarding the existence of a multi-verse, whether there was or was not a need to posit the existence of more than matter to explain mind, consciousness, mathematics and yes, is there A God?

His replies to these probes were gnomic yet consistent. His personal opinions he said, are of no value. Only the maths and science is true or false and when it comes to the other questions he either could not work out what they really mean or like the chimp the answers to such questions may be beyond our capacity as humans ever to understand.

On that happy note the day ended. We also all had an excellent lunch which had given us time to reflect, circulate and network. There was also quite a lot of discussion about the sad fact that the changes in Education Policy that Michael Gove, Secretary of State for Education, is bringing into force, including the exclusion of RS from his new exam the EBac. The result is many heads are already downgrading Religious Education and this move will put students off from studying Religion and Philosophy at A level and so places the subject as a serious academic discipline under threat just when so much has been achieved as this excellent conference demonstrated. To see the paper they were discussing: RE in Schools is Failing.