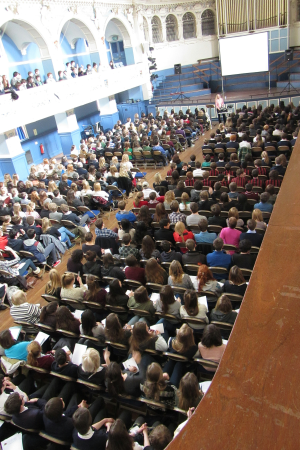 Attending Julie Arliss’ Conference for Gifted and Talented students in March this year was for me a revelation for as a retired teacher such events did not exist twenty years ago. The venue was Oxford Town Hall, an impressive Edwardian building which was filled to capacity with 680 school students from year 10 and 11, i.e these were not Sixth Formers but teenagers of 15 or 16.

They turned up from all over the country, from the North, the South, Cornwall and Guernsey. They came in groups from around ten to thirty with their teachers, and represented every type of school and our full cultural and social diversity. “Ordinary” maintained schools however were in the minority for new rules regarding visits, funding and the provision of cover for teachers out of school have made it more difficult for such schools to afford sending students and teachers.  What a pity.

The first thing that struck me however was how well the students behaved, accepting the need to fill up seats as directed and settling down with eager anticipation for what lay ahead.

Promptly at ten Julie Arliss welcomed the students.  She explained that the aim of the conference was to introduce new and challenging ideas and to demonstrate that while in school and university it is necessary to focus on subjects – like  English, Maths and Biology – in reality all knowledge is interlinked and discoveries in one area can open up unexpected advances in quite different areas. 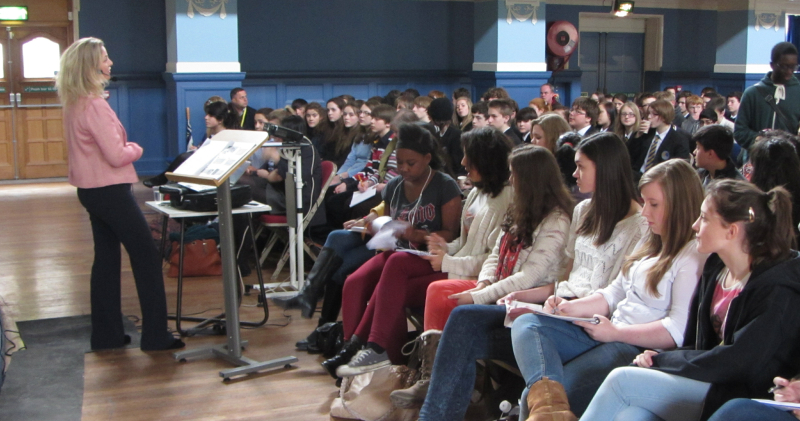 In the riveting Power Point presentation that followed, Julie demonstrated this by exploring the topic “Does a Snail Have Consciousness”. She started dramatically by showing us how the logarithmic spiral that can be seen in hurricanes and galaxies, also fits the spiral of the snail’s shell, so showing that the maths and matter of all three demonstrate the consistency of the cosmos. She then explored the way consciousness is currently measured in animals and humans and the way philosophers have approached consciousness starting with Plato and Aristotle. She then related these ideas to the work of the neuroscientists.  She spoke for just over an hour, which is demanding, but I could not detect any falling off of attention amongst the ranks of students.

During the five minute break before the next presentation however, I asked Julie if she thought she might have spoken for too long and did the students not need a longer break. She rejected these suggestions saying that in her experience bright students were quite ready to concentrate for long periods and I had to agree that I had seen no signs of the restiveness or dropping off of interest which is what I rather expected. 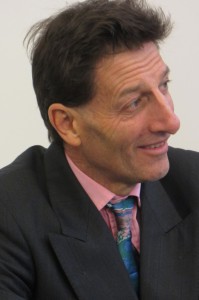 On then came Jeffrey Hedges an Australian performance consultant and author experienced both in coaching their Olympic athletes and gifted and talented students.  His topic was Resilience and Self-Esteem. He spoke of the psychological pressures that school and peer groups can impose which can crush positive feelings of self-worth in students and with humour, energy and clarity laid out strategies for coping and boosting self-confidence. This was met with peals of laughter and rapt attention and when I moved amongst students in the break that followed the feedback I got could not have been more positive. Several said they found what he had said, “Really, really helpful.”

This was followed by Julie Arliss speaking again.  This time her topic was the “The Philosophy of the Embryo” in which she explored the history of how the embryo has been considered within the Christian tradition and how this has changed until the development of contemporary Christian thinking  about abortion and the alternative arguments that some philosophers are making for considering the embryo to be not a person but a potential person. This whole subject remains deeply contentious and her presentation did not set out to promote any single conclusion, but rather to deepen awareness of the complexities and difficulties both practical and theoretical the whole issue raises.  Again it was fascinating and demanding and it was met with rapt attention.

This brought us to lunch when the students could either eat the packed lunches they had brought or venture out onto the streets of Oxford while a room and a light lunch was provided for the teachers. Since I had been asked to carry out some admin this gave me the opportunity to question the teachers about their reactions to the conference.  I found that many of them had been bringing groups for some years and they said they had no doubt that their students had found the conferences challenging and interesting and had motivated them to work and think harder. These comments I found were being made by both humanities and science teachers.

Since Professor Tom Greggs who was billed to speak on “The Politics of Tolerance” was ill,  Julie Arliss and Jeffrey Hodges proceeded to have a debate between them on whether or not we have Free Will.  This was presented in a way which was both serious and knockabout, provoking lively reactions from the audience. After they had both spoken contributions from the floor were invited and despite the intimidating size of the audience there was no shortage of students ready to jump up and express themselves with remarkable clarity and self-confidence. It ended with a vote being taken and – surprise, surprise – free will won. 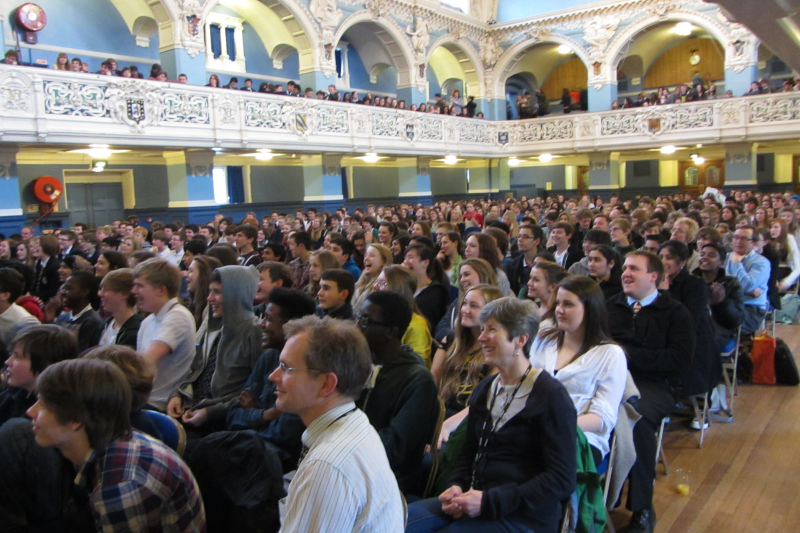 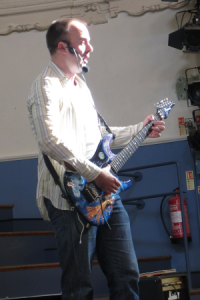 Again a short break and then the final session presented by Dr Mark Lewney, his topc “Rock in Eleven Dimensions: Albert Einstein Meets Jimmy Hendricks. He is a a physicist specialising in string theory with a Harvard Ph.D. in Acoustics.  He is also an exceptional rock guitarist which he proceeded to demonstrate with ear-piercing proficiency.  This of course went down very well with the students most of whom I suspect had never heard heavy metal live before.  It soon became clear however that this was no gimmick as he proceeded to demonstrate using his guitar how sound and the vibration of strings work and showed that instead of imagining the smallest objects to be “particles” which brings to mind grains of sand, the reality quantum physics is exploring is much better thought of as consisting of tiny vibrating strings.  For the first time in my life I now thought I had a way of coming to terms with the apparent indeterminacy of the fundamental forces that constitute our mysterious cosmos.

And so the day ended on a high note as many came up to express their thanks and in true contemporary style photograph Julie, Jeffrey and Mark and each other on their I phones as they set off for home tweeting about their day. 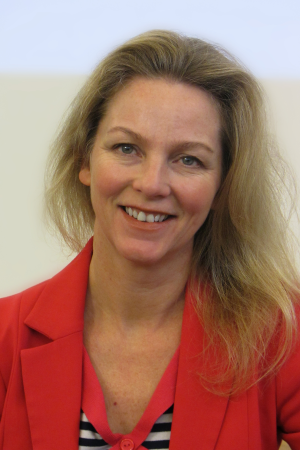 Talking afterwards to Julie I learnt that she has been running Gifted and Talented conferences for some twelve years. Currently, as well as teaching at Kings College Taunton, she and her small team of A list speakers run such conferences around the country. In May and August they fly off to run a whole series in Australia and New Zealand.

In doing so she is clearly meeting an increasingly recognised need which is that the brightest five or six percent really do need to be recognised and require very different treatment and certainly some very different opportunities if they are to be able to flourish in whatever type of school they are in.  The reality is that the sharpest and quickest can easily have a very hard time, becoming the focus of resentment from both mediocre peers and their teachers. Too often they are expected to fend for themselves or keep quiet while attention is focused on improving the dire performance of the least able and stretching and motivating those in the middle, often leaving the brightest bored to distraction or driven into destructiveness. This is a terrible waste for in the long run our brightest pupils are our most valuable resource.